The Chetco River is located North of the Smith River in the heart of Brookings, OR. This river system virtually derives out of the same watershed as the Smith River. The Chetco River is a low gradient system that has some of the best main stem spawning habitat for Salmon and Steelhead. After a big rain, when the river drops down and come into shape, it has a beautiful turquoise glowing green color.

Like most of the coastal rivers, the Salmon season starts with the rain in the Fall. Unlike the Smith River, when the river levels rise with the first big rains in the Fall, Steelhead will start to trickle in with the big push of Salmon. Most people will not target the Steelhead at this time of year, but you can put together some good numbers of early run Steelhead. The Salmon season on the Chetco River is about the same timeframe as on the Smith. Steelhead season starts fairly fast on the Chetco River in late-December.

It generally will peak in early January with some large mid-teen to twenty pound class of Steelhead mixed in. The Steelhead run will slow down to a steady trickle throughout the Winter, but you still get good spurts of fish coming through the system into March. 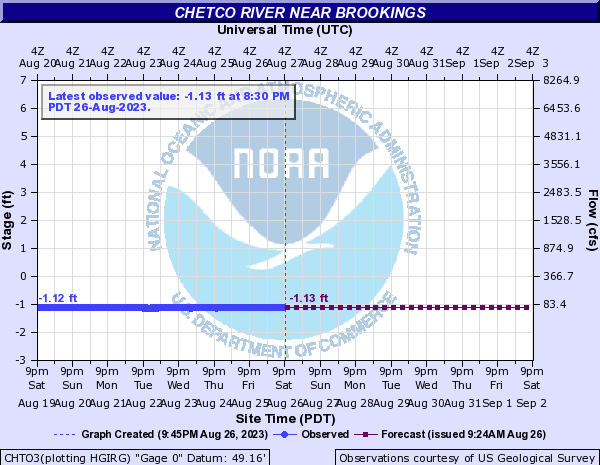 When I first started fishing the Eel River in 2000, it was a sad story. The Salmon were few and far between, but the Steelhead fishing was decent. When they decided to close the ocean to Salmon fishing in the mid-2000’s, it was the best move that the Department of Fish and Game could have made for the Eel River Salmon. After it re-opened, the numbers of returning Salmon was unreal. There were fish everywhere! The fishing numbers went from one to five a boat up to 8 to 12 a boat. Since the closure, the river has been rebounding from low numbers to some of the best numbers of returning Salmon in decades. The Steelhead return is on a great steady climb. The future outlook for the river looks great.

With this river system, weather is everything. The Eel River is a muddy drainage that can stay blown out for weeks because of all the past logging in the area. When you have a chance to fish the Eel, it will start around November with King Salmon. The Salmon fishing comes to the end around late-November. The Winter Steelhead fishing starts like all the other rivers around January and finishes in March. The average Salmon is about 20lbs. and the average Steelhead is 8-12lbs. 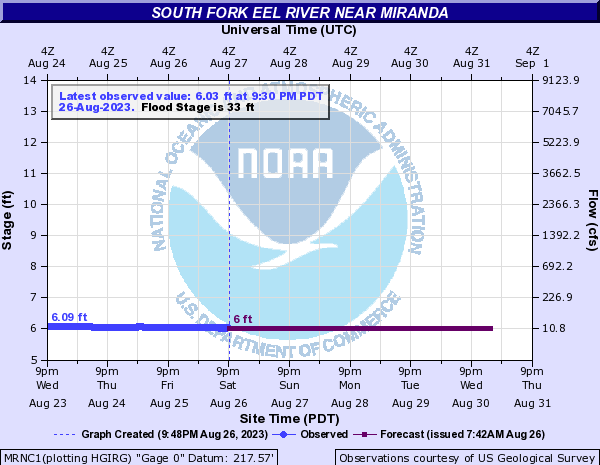 The second largest river system in California, the Klamath River flows the entire State from East to West. From its origin in the mountains above Klamath Falls, Oregon to the Pacific Ocean, it spans a distance of 263 miles of some of the most rugged terrain California and Oregon has to offer. With the removal of 3 dams scheduled for 2016, the Klamath River’s future looks very promising. With the removal of these dams, it should encourage and help the fish population grow dramatically. It will open hundreds of miles of long lost spawning habitat that has been inhibited by these none fish passage dams.

Having a large volume of water flow all year round makes this river very special. The Spring brings warm weather and solid spring showers. The snow in the Trinity Alps and surrounding mountains starts to melt and in turn the CFS (cubic feet per second) starts to raise the river from its steady Winter levels. Around early-May the Spring Chinook (King Salmon) start running up the river.

This special run of King Salmon is short-lived and will last into early-June at the latest. Through June and into mid-July is the dormant time of the river. Around late July the summer run of Steelhead start to show up. When it reaches late-August to early-September, the Klamath is in its peak of fishing. You have the luxury of catching Steelhead and Salmon in the same day, even in the same riffles. This run will last through September and into October. 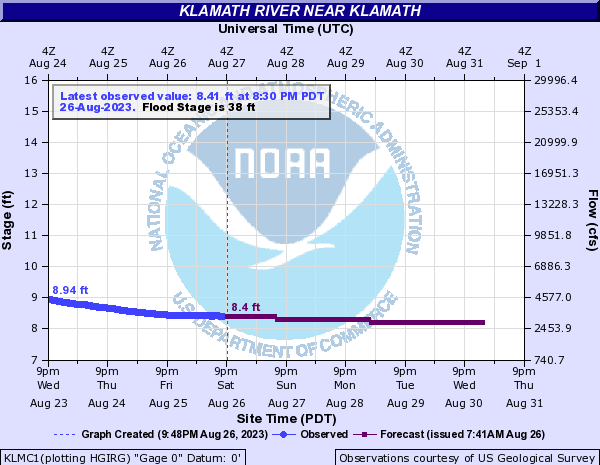 The Mad River is one of the most popular bank angling rivers in California. It is located just outside of the town of Arcata off of Hwy 299. This river system is known for its Steelhead run. The fish that swim up the Mad River can range from 5lbs. to 20lbs. The average fish size in the Mad River is roughly 8-12lbs. With a hatchery in the town of Blue Lake, you have the opportunity to catch hatchery fish, which most rivers in Northern California don’t have! Your daily bag limit is 2 fish per day, but you can have some great days of wild and hatchery Steelhead.

In November the rains will blow open the mouth of the Mad River. A small run of King Salmon come up. In 2007, six stray Sockeye Salmon same up the river and sat at the Blue Lake Bridge. It’s hard to say where they came from. You will see small spurts of Steelhead in late-November and December. January fish start pouring into the river system. Weather permitting, the fishing is good into late-February. With March approaching you will start to see a lot of run back Steelhead.

These are Steelhead that have spawned and are heading back to the ocean. Unlike Salmon, Steelhead can do to and from the river multiple times. Once Salmon start staying in the rivers, they inevitably die. 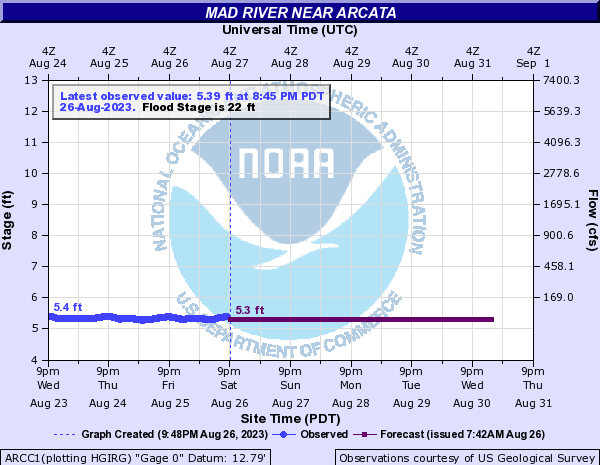 The Van Duzen River is a river on the north coast of California. It is a major tributary of the Eel River and drains 429 square miles (1,110 km2), mostly in Humboldt County, with a small portion in Trinity County. The river travels 63 miles (101 km) from its headwaters on the west side of the North Coast Range to its confluence with the Eel River, about 14 miles (23 km) upstream from the Pacific Ocean and 17 miles (27 km) south of Eureka, California. The river’s elevation is over 5,000 feet (1,500 m) at its source and only 60 feet (18 m) when it merges with the Eel River. The river has two forks in its upper reaches. The North Fork travels northwest until it reaches the small town of Dinsmore, where it starts flowing west. The Little Van Duzen, which also flows northwest, joins the North Fork a few miles later. The river flows roughly west from then on. It meets its largest tributary, Yaeger Creek, about 5 miles (8.0 km) before it reaches the Eel River.

The river is used for recreation at locations including Grizzly Creek Redwoods State Park and for industrial, agricultural and municipal water supply by residents living along the western portion of California State Route 36. The river also provides wildlife habitat for preservation of rare and endangered species including cold freshwater habitat for fish migration and spawning. The primary land use in the watershed is timberland. Road construction and poor logging practices, particularly historical, have increased erosion, leading to excessive sediment buildup in the river and its tributaries. In addition, gravel mining, particularly at the confluence of the Van Duzen and Eel River, has increased erosion, affected channel alignment and may block fish migration.

(temporary information brought in from the Van Duzen wikipedia page. To be replaced…) 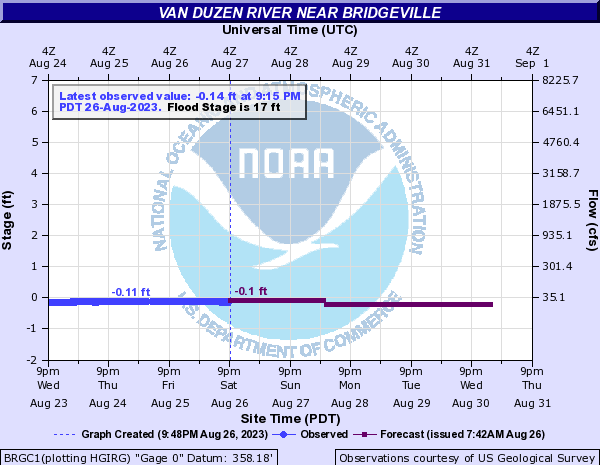 Arising near Crater Lake, the Rogue River flows from the geologically young High Cascades through the somewhat older Western Cascades and then through the more ancient Klamath Mountains. The High Cascades are composed of volcanic rock produced at intervals from about 7.6 million years ago through geologically recent events such as the catastrophic eruption of Mount Mazama in about 5700 BCE. The volcano hurled 12 to 15 cubic miles (50 to 63 km3) of ash into the air, covering much of the western U.S. and Canada with airfall deposits. The volcano’s subsequent collapse formed the caldera of Crater Lake.

Older and more deeply eroded, the Western Cascades are a range of volcanoes lying west of and merging with the High Cascades. They consist of partly altered volcanic rock from vents in both volcanic provinces, including varied lavas and ash tuffs ranging in age from 0 to 40 million years. As the Cascades rose, the Rogue maintained its flow to the ocean by down-cutting, which created steep narrow gorges and rapids in many places. Bear Creek, a Rogue tributary that flows south to north, marks the boundary between the Western Cascades to the east and the Klamath Mountains to the west.

(temporary information from the wikipedia article regarding Rogue River.) 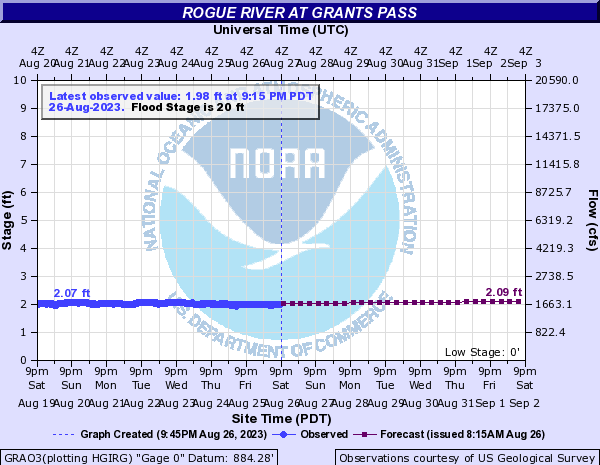 Located on the California and Oregon border, the Smith River has the reputation for producing some of the largest Salmon and Steelhead in California and Oregon. The river itself is the only undammed, undiverted river in the State of California. Its headwaters come from undeveloped wild country. The river is a fast moving, crystal clear system that offers some spectacular scenery.

The fishing season for the Smith kicks off with the big rains in late-October or early-November. Massive King Salmon, accompanied by Searun Cutthroat and the occasional Silver Salmon come flooding into the river system. The Salmon season on the Smith starts to slow down around Thanksgiving.

December is the transitional stage between lingering Salmon and the beginning of Steelhead season. Once January arrives, the Smith is in full swing for Winter Steelhead. Generally the Steelhead season on the Smith River will last into the early March. 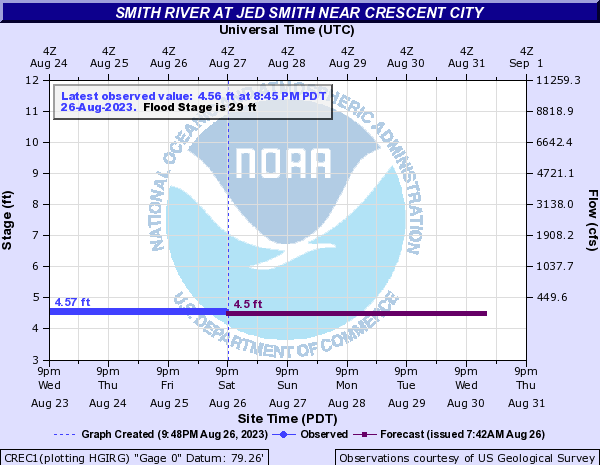 The largest tributary to the Klamath, the Trinity starts at the confluence of the Klamath in Wichipek just off of Hwy 96. It winds along Hwy 299 till it reaches the outflow of the Lewistan dam. With the efforts of the Trinity River Restoration program, this river has a very bright future. Don’t get me wrong, the Trinity is one of the best fisheries in the state, but with the help of this program and the millions of dollars that are being poured into the preservation and restoration of this river, it won’t be long till it becomes one of the top fishing destinations on the West Coast. The Trinity River is one of the few rivers on the West Coast that has Steelhead in the system all year round.

The Trinity River has many small runs all year round. The largest runs are in the Fall and Winter. The Fall run will start around early-to-mid-September. The peak of the Fall run is in early-October. You can put together good days through late-October. Once the rains come, you will have a slow time from November to early-January. Once January comes, you have Winter Steelhead fishing through mid-March. 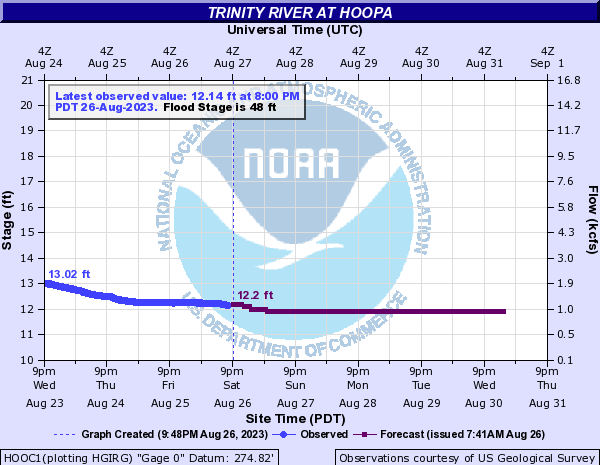 10 minutes north of the Elk River sits the Sixes River. Like its sister river the Elk, it is a river system of its own. Staying muddy for many days after the Elk has cleared, this river is one river that deserves more credit. With a salmon run a bit smaller than the Elk, it can still compete with many of the world class rivers in Oregon and California.

The Steelhead in this river can range from 5lbs. to the upper teens. The Salmon run will coincide with the Elk runs and the Steelhead runs will last a little e long going into March.

The Mattole River is a river on the north coast of California, that flows northerly, then westerly into the Pacific Ocean. The vast majority of its 62 miles (100 km) course is through southern Humboldt County, though a short section of the river flows through northern Mendocino County. Communities, from north to south, closely associated with the Mattole River include: Petrolia, Honeydew, Ettersburg, Thorn Junction, and Whitethorn. The river enters the ocean at the Mattole Estuary about 4 miles (6.4 km) west-southwest of Petrolia and 10 miles (16 km) south of Cape Mendocino.

-From Wikipedia, the free encyclopedia 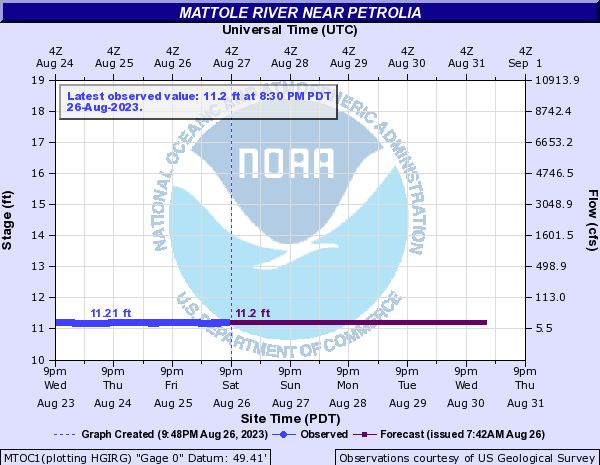